This was probably my third visit as a tourist to the old imperial city of Aachen. I really like the old town with the amazing cathedral. It is a masterpiece of architecture and art. Since its construction around the year 796 it has been the crowning church for 30 German kings and has seen many wars.

Aachen was founded under emperor Hadrian around the year 124. The Roman soldiers loved the natural springs and originally called the settling Aquisgrana (healing water). Emperor Charles the Great (Charlemagne, Karl der Große) several hundred years later made the city his capital (around the year 800). He was however not always there. During the time of the Carolingian Empire the head of state and his entire court were constantly traveling through the realm. Huge imperial estates (Pfalz) in all regions made it possible that the court could travel from city to city until the local resources were used up and they had to move forward to the next place.

Charles the Great started building his palace and the palatine chapel around 796. More information can be found in the Wikipedia article for the Aachen Cathedral. The outside of the building as we see it today is still in many areas similar to the original chapel. But since it was (partially) destroyed several times and later kings also wanted to add their mark on this historic place, most of the structure is from later centuries. 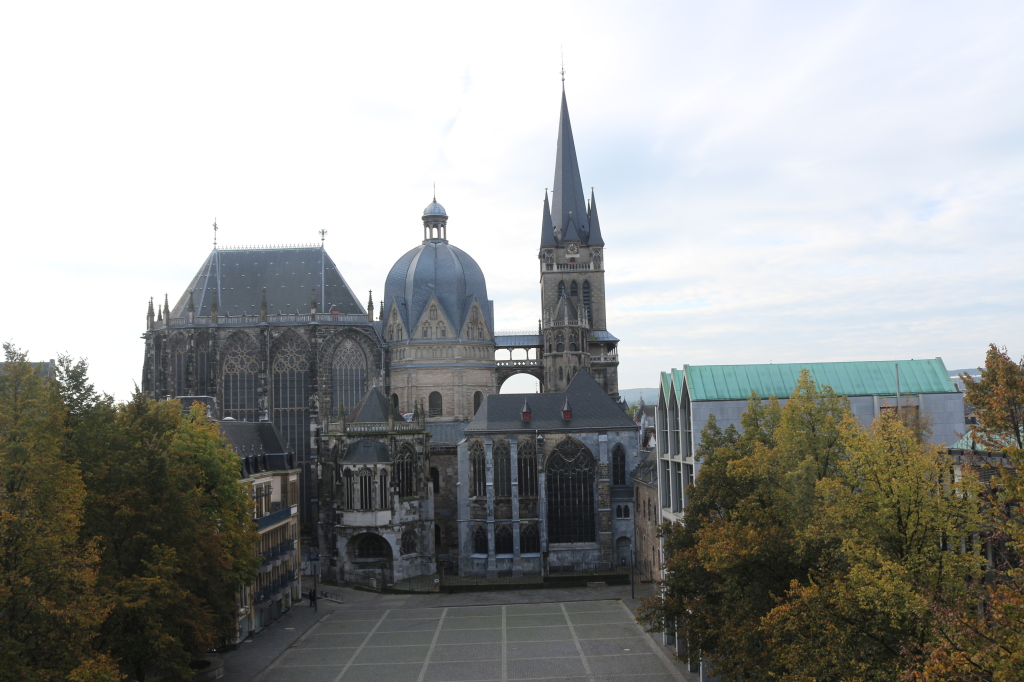 The interior is full of gold and Venetian mosaics. This was added after 1871. The original was most certainly much less glittery. The restoration done at that period was more interested in underling the importance of Charles the Great for Europe (around 1870 they focused more on Germany). They did not really want to “restore” the original. 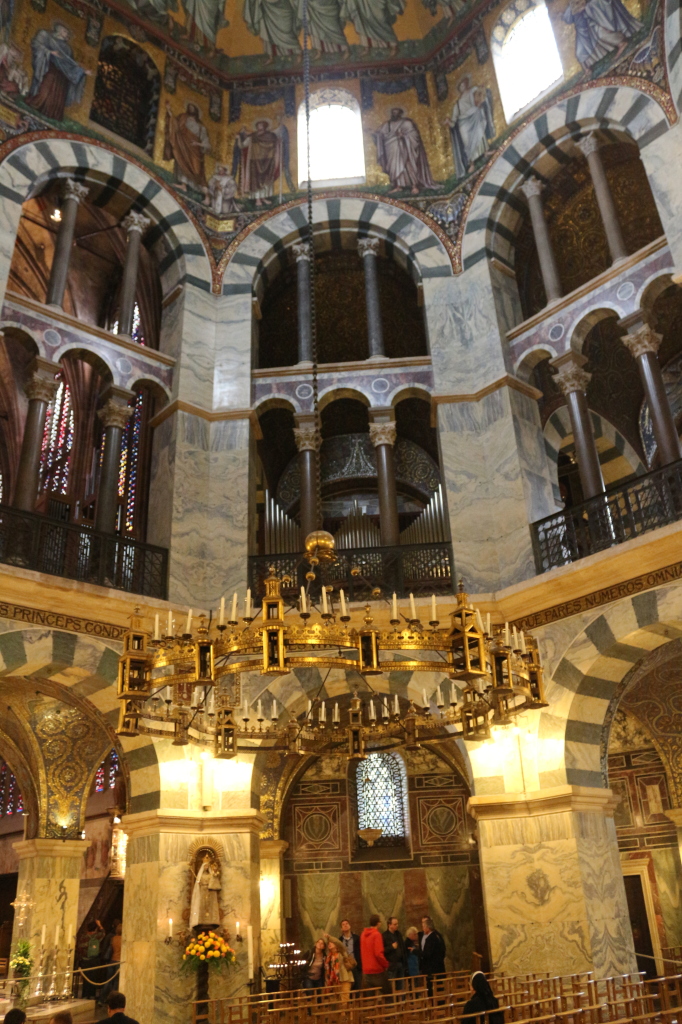 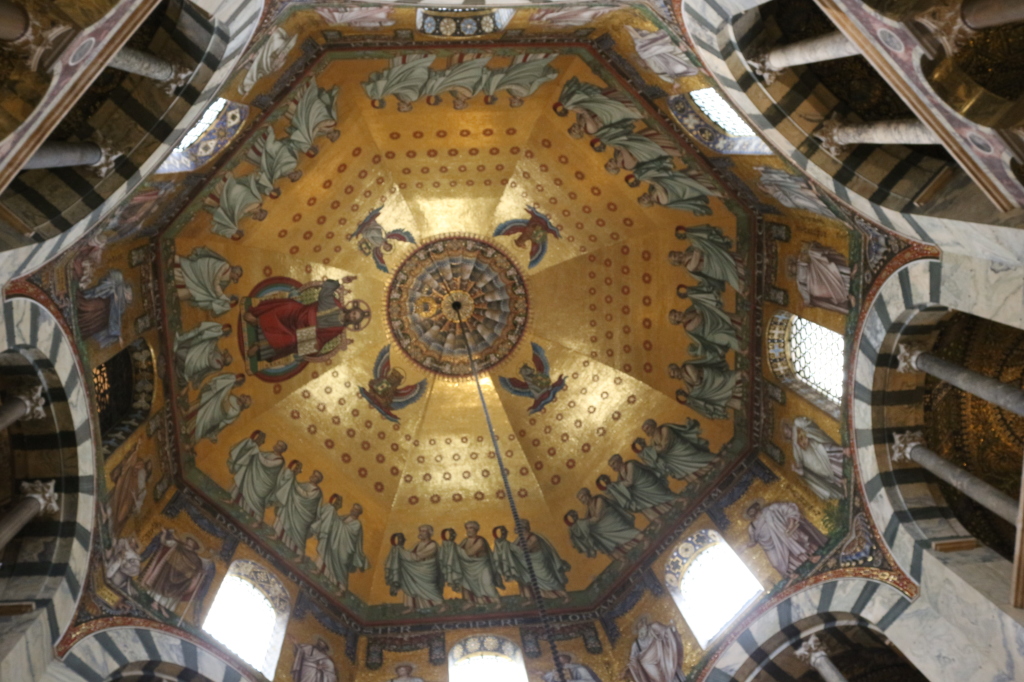 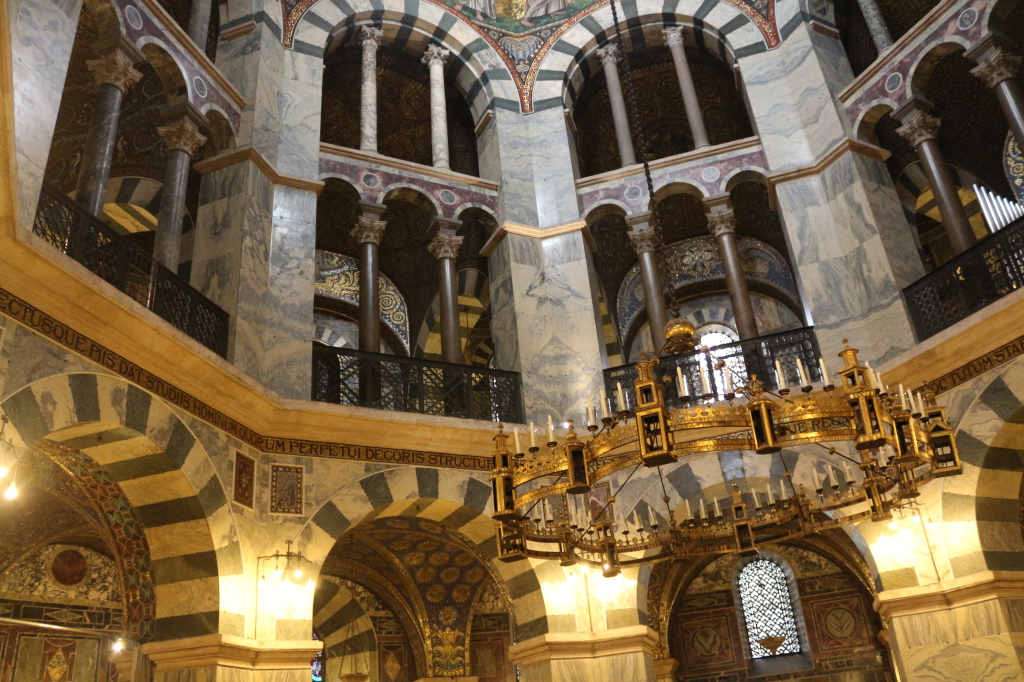 The huge golden chandelier hanging in the middle of the Octagon is the most striking element a visitor immediately notes when entering the central dome. The chandelier was donated by emperor Barbarossa somewhat around 1165/1170. It contains 48 candles. The circle of the wheel chandelier symbolises the city wall of the New Jerusalem. The stylised city wall of the chandelier contains eight large and eight small gate towers, which are arranged symmetrically. Because of the octagonal structure of the surrounding building, the traditional depiction of the Heavenly Jerusalem with only twelve towers was precluded. 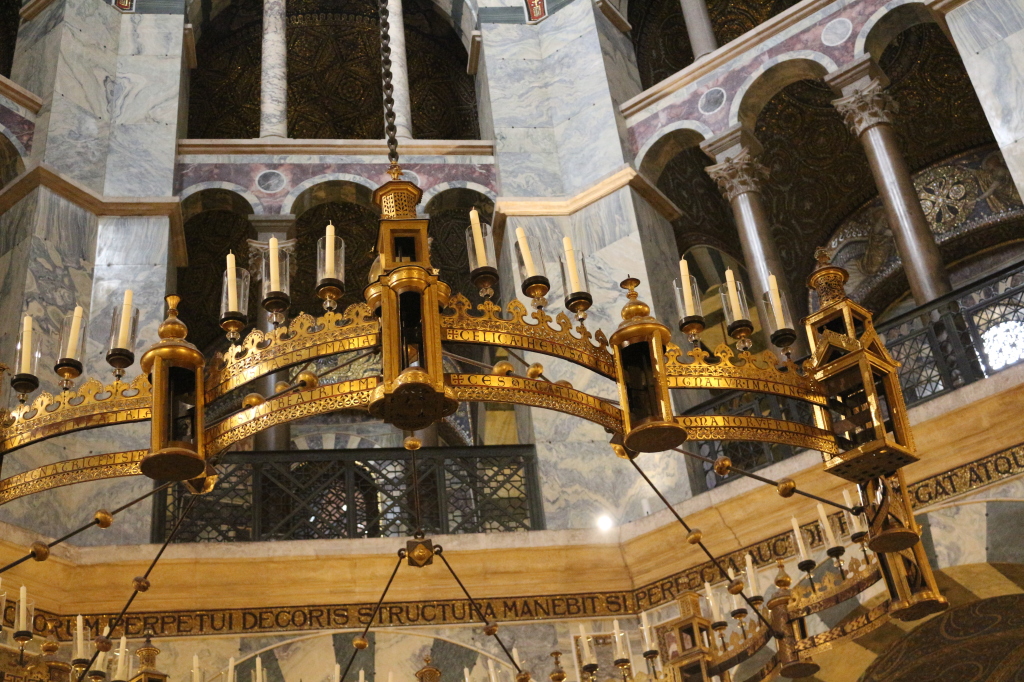 The cathedral was one of the most important destinations for pilgrims in Europe. Reason for this is the large number of relics and shrines stored and shown in the church.

Unfortunately I did not have the time to join the guided tour through the cathedral. Therefore I could not get closer to the shrines. Even worse: You can only enter the first floor with the throne of Charles the Great if you are in a tour. However, it was not my first visit to the cathedral. I took the following picture when I was there last time. 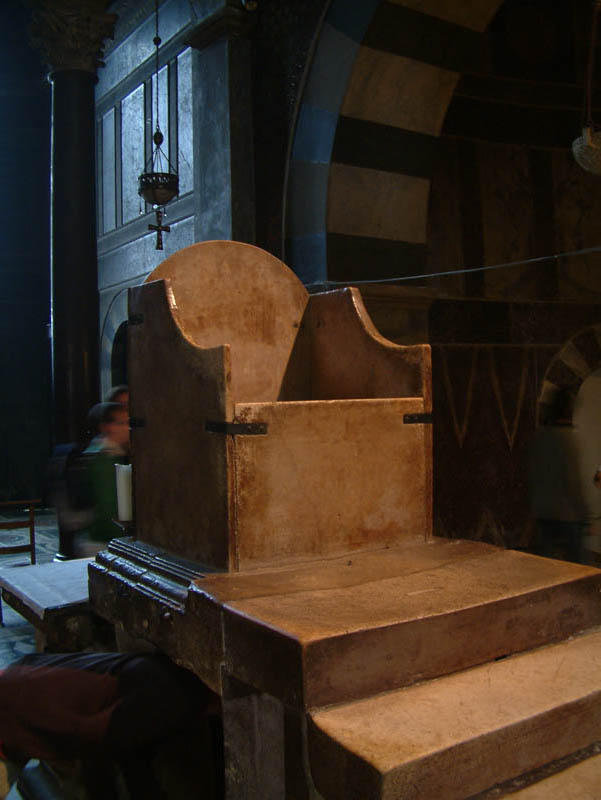 I know that the throne is supposed to be from the temple of Jerusalem. One theory says the marble and the steps were taken from the Church of the Holy Sepulchre in Jerusalem around 800. Another (unverified) interpretation claims they are the steps of Pilate’s palace, which Jesus climbed up after he was whipped. In any case it was the probably most precious material available at that time.

But to be honest: from my view it just looks unsophisticated and very, very uncomfortable. Must have been quite a torture for the 30 to 31 kings that were crowned on this.

The gothic city hall (Rathaus) was built on the foundations of the old palace of Charles the Great. It is an impressive building.

The Granus tower is the only element that survived from the original palace. The building is still used today for the city council. The room on the ground floor offers modern facilities.

The first floor is basically just one large room. It was the big banquet room for the coronation celebration. Today it is used for official receptions and the Karlsprize. It usually also houses replica of the imperial regalia. During my visit they were not shown because of renovation works.

In the evening I also visited the University Hospital of Aachen. Luckily not because I was sick. I was interested in the unusual architecture. The hospital is also the largest in Europe. All technical elements like ventilation / air condition are on the outside of the building structure. The building is thus more or less turned inside-out. This style is similar to other landmarks like the Centre Georges Pompidou in Paris or the Lloyd’s Building in London. So it looks more like a chemical plant or refinery. 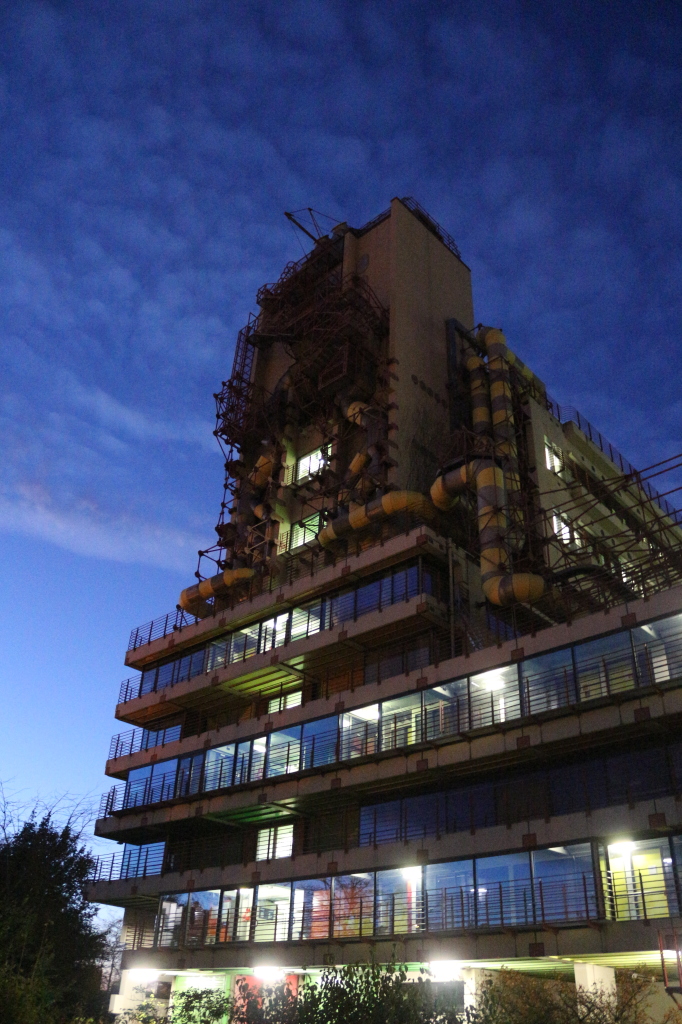 The inside of the building looks like a spaceship. Well, a spaceship from the 70s and with almost everything in bright green. Really quite unusual. But somehow it looks interesting and also sort of works for me. I personally would not design my living room like this. But the overall style and design applied is at least very consistent and the combination actually is OK.